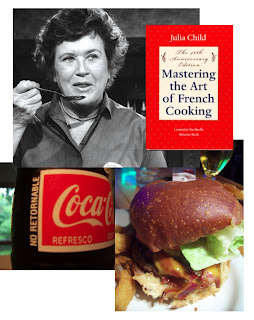 We're over the hill with "Ten Things" Part 4, filled with topical discussions, ruminations on why we love to cook and the people who inspire us, plus tastings and reviews of foods from near and far. The only way to really know what's here is to download and listen!

If you are a fan of what we're doing here and would like to help us continue covering the Ithaca dining scene and bringing you conversations with people in our regional food community, please consider making a donation by clicking on the DONATE button on our main page. And any time you want to get in touch or be part of a future episode, you may leave a comment on the blog, call our voicemail line anytime at 607-215-4392, or send an email to: feedback at eatingithaca dot com. Remember to follow us on Twitter for continuing updates throughout the week!


Stuff we talked about in this episode:

Posted by EATING ITHACA at 6:00 AM

I found your Mexican Coca-Cola evaluation quite insightful. I find a similar "real sugar" effect with other sodas. Surprisingly, the smell of HFCS soda seems OK, but when I taste them, there's a letdown. It's as though you have a bouquet of flowers, and in the case of HFCS, someone has stepped on it (leaving only a vague average of flavors).

Maybe it would take a sensory physiologist to uncover what's going on, but it appears the odor is the same, but the signals from the tongue in the HFCS case are interfering somehow. Sigh.

BTW, I passed by the Ithaca Shopping Plaza yesterday, and noticed a small, new, permit on the window where the construction is happening. It lists the owner as "Five Guys Burg. & Fries". QED? ;-)

Here's a new Cornell Dining collaboration that sounds as though it could be interesting:
Moosewood at Anabel Taylor. Has anyone tried it yet?

Another strong association between a show and a food/beverage - Tea, Earl Grey, Hot.


We need your support to keep this podcast and website going. If you enjoy what we do, please consider making a donation by clicking the button above. Thank you!
If you're interested in becoming a sponsor of our podcast, you can get details by sending an email to: dave [at] eatingithaca [dot] com.

This is a Flickr badge showing public photos and videos from EatingIthaca. Make your own badge here.

EATING ITHACA
It's a blog and podcast about local eating, including every restaurant in town from A-Z, plus interviews with the chefs, the farmers, the businesses, and anyone who make eating in Ithaca and the Finger Lakes so great!